Note: this page is a summary of 3GPP TR 26.998, for details please check the TS directly.

The present document collects information on glass-type AR/MR devices in the context of 5G radio and network services. The primary scope of this Technical Report is the documentation of the following aspects:

AR glasses contain various functions that are used to support a variety of different AR services as highlight by the different use cases.

The various functions that are essential for enabling AR glass-related services within an AR device functional structure include:

In TR 26.928 clause 4.8, different AR and VR device types had been introduced. This clause provides an update and refinement in particular for AR devices. The focus in this clause mostly on functional components and not on physical implementation of the glass/HMD. Also, in the context the device is viewed as a UE, i.e. which functions are included in the UE.

A summary of the different device types is provided in Table 4.1. The table also covers:

In all glass device types, the sensors, cameras and microphones are on the device.

The definition for Split AR/MR in Table 4.1 is as follows:

The Wired Tethered STAR Glass device type is for reference purposes only and not considered in this document as it is not included as part of the study item objectives.

The following interfaces between the different functions of the device functional structure for device type #1 are defined: 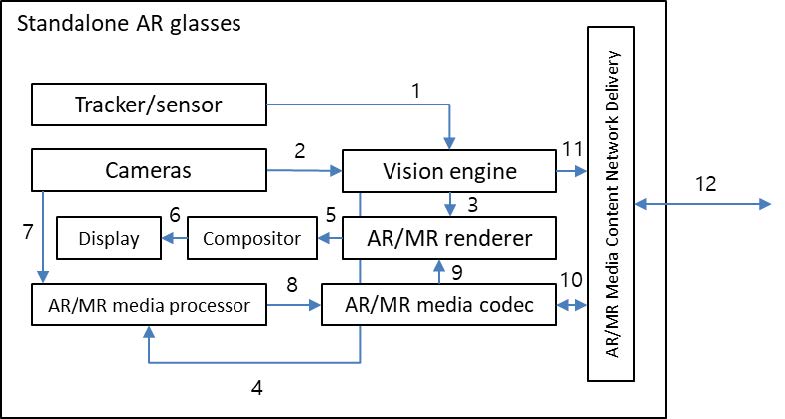