XR engines provide a middleware that abstracts hardware and software functionalities for developers of XR applications. An XR engine is a software-development environment designed for people to build XR experiences such as games and other XR applications. The core functionality typically provided by XR engines include a rendering engine ("renderer") for 2D or 3D graphics, a physics engine or collision detection (and collision response), sound, scripting, animation, artificial intelligence, networking, streaming, memory management, threading, localization support, scene graph, and may include video support. Typical components are summarized below:

Figure 4.4.1-2 provides an overview of typical CPU and GPU operations for XR applications. 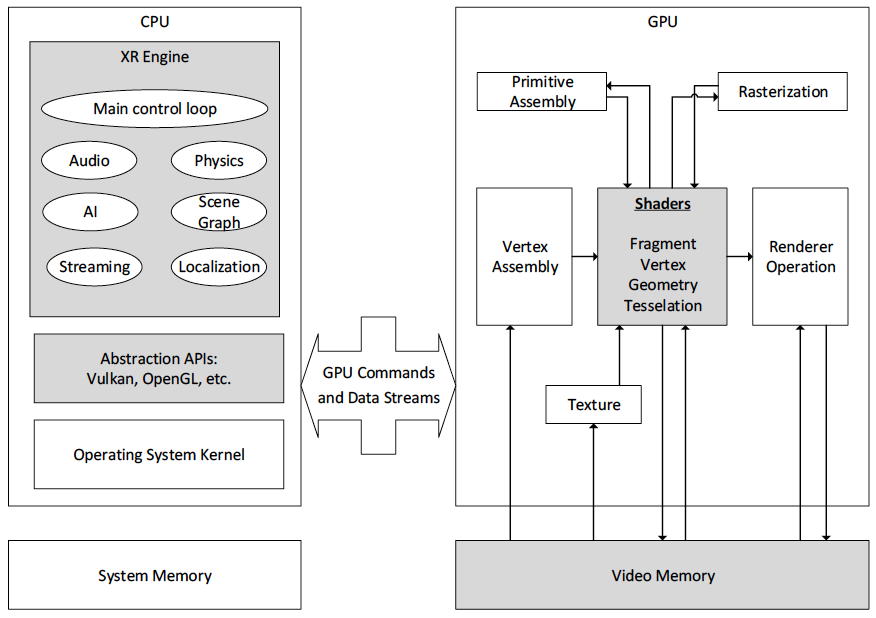 key aspects XR engines and abstraction layers is the integration of advanced functionalities for new XR experiences including video, sound, scripting, networking, streaming, localization support, and scene graphs. By well-defined APIs, XR engines may also be distributed, where part of the functionality is hosted in the network on an XR Server and other parts of the functionality are carried out in the XR device.

Rendering or graphics pipelines are basically built by a sequence of shaders that operate on different buffers in order to create a desired output. Shaders are a type of computer programs that were originally used for shading (the production of appropriate levels of light, darkness, and colour within an image), but which now perform a variety of programmable functions in various fields of computer graphics as well as image and video processing.

The input to the shaders is handled by the application, which decides what kind of data each stage of the renderingpipeline should operate on. Typically this data is 3D assets consisting of geometric primitives and material components. The application controls the rendering by providing the shaders with instructions describing how models should be transformed and projected on a 2D surface.

Generally there are 2 types of rendering pipelines (i) rasterization rendering and (ii) ray-traced rendering (a.k.a. raytracing) as shown in Figure 4.2-1:

However, there are several flavors to each type of rendering and they may in some cases be combined to generate hybrid pipelines. Generally both pipelines process similar data; the input consists of geometric primitives such as triangles and their material components. The main difference is that rasterization focuses to enable real-time rendering at a desired level of quality, whereas ray tracing is likely to be used to mimic light transmission to produce more realistic images.

3D rendering is the process of converting 3D models into 2D images to be presented on a display. 3D rendering may include photorealistic or non-photorealistic styles. Rendering is the final process of creating the actual 2D image or animation from the prepared scene, i.e. creating the viewport. Rendering ranges from the distinctly non-realistic wireframe rendering through polygon-based rendering, to more advanced techniques such as ray tracing. The 2D rendered viewport image is simply a two dimensional array of pixels with specific colours.

Typically, rendering needs to happen in real-time for video and interactive data. Rendering for interactive media, such as games and simulations, is calculated and displayed in real-time, at rates of approximately 20 to 120 frames per second. The primary goal is to achieve a desired level of quality at a desired minimum rendering speed. The rapid increase in computer processing power and in the number of new algorithms has allowed a progressively higher degree of realism even for real-time rendering. Real-time rendering is often based on rasterization and aided by the computer's GPU.

Animations for non-interactive media, such as feature films and video, can take much more time to render. Non real-time rendering enables use of brute-force ray tracing to obtain a higher image quality.

In several applications, rendering or pre-rendering is not exclusively carried out in the device GPU, but assisted or split across the network. If this is the case, then the following aspects matter:

Typical buffers are summarized in the following: