There are two forms of Bluetooth wireless technology systems, both including device discovery, connection establishment and connection mechanisms.

BR/EDR operates in the unlicensed ISM band at 2.4 GHz. The system employs a frequency hopping transceiver to combat interference and fading. BR uses a shaped, binary frequency modulation (GFSK) to minimize transceiver complexity. The symbol rate is 1 Msym/s. The bit rate is 1 Mb/s for BR; 2 Mb/s or 3 Mb/s for EDR.

During typical operation a physical radio channel is shared by a group of devices that are synchronized to a common clock and frequency hopping pattern:

Devices in a piconet use a specific frequency hopping pattern:

The physical channel is sub-divided into time units known as slots:

Each AMP consists of a Protocol Adaptation Layer (PAL) on top of a MAC and PHY. The PAL is responsible for mapping the Bluetooth protocols and behavior (as specified by HCI) to the specific protocols of the underlying MAC and PHY. L2CAP channels may be created on, or moved to, an AMP. L2CAP channels may also be moved back to the BR/EDR radio when those capabilities are not necessary or when the AMP physical link has a link supervision timeout. A link supervision timeout on an ACL link connecting two BR/EDR devices forces a disconnection of all AMP physical links between those devices.

AMPs may be enabled or disabled as needed in order to minimize power consumption in the system. 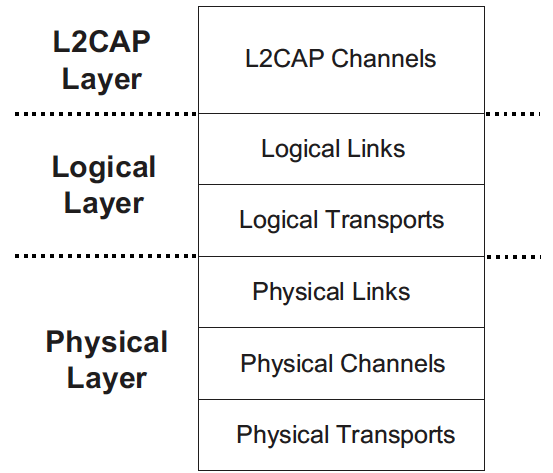 Bluetooth is a wireless communications system. In poor RF environments, this system should be considered inherently unreliable. To counteract this the system provides levels of protection at each layer.

On ACL logical transports the results of the error detection algorithm are used to drive a simple ARQ protocol. This provides an enhanced reliability by retransmitting packets that do not pass the receiver’s error checking algorithm.

The L2CAP layer provides an additional level of error control that is designed to detect the occasional errors not detected by the baseband and request retransmission of the affected data. This provides the level of reliability required by typical Bluetooth applications.

Broadcast links have no feedback route, and are unable to use the ARQ scheme (although the receiver is still able to detect errors in received packets). Instead each packet is transmitted several times in the hope that the receiver is able to receive at least one of the copies successfully. Despite this approach there are still no guarantees of successful receipt, and so these links are considered unreliable.