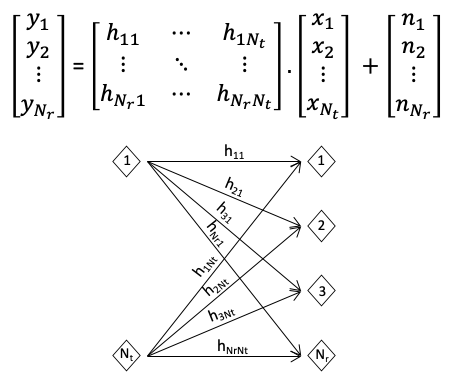 Linear equalization means to apply a matrix to y, in order to get an estimation of x, denoted as :, where different W corresponds to different types of equalizers.

A ZF Equalizer fully inverses the impact of the wireless channel. It applies the (pseudo) inverse of the channel frequency response to the received signal. I.e., , and

Note cannot be inverted if its rank is less than Nt. This may happen when e.g. , or when the channel is highly correlated. In such case, ZF equalization of the received signal cannot be performed and the original signal cannot be recovered.

A MMSE equalizer tries to minimize the MSE of the residual error :

e is minimized when e and y is orthogonal (otherwise, we can always use the information of y to reduce e). I.e.,

Now let's expand the above formula:

Note Being able to derive the equalization matrix W does not mean the transmitted signal can be re-constructed. In order to do so, it must also satisfy . E.g. if , the signals sent from the two transmitter antennas must be generated from the same stream of input source. One popular example of such case is the Alamouti code.

In a SISO system, the aforementioned equations can be simplified:

In the example below, it is assumed: