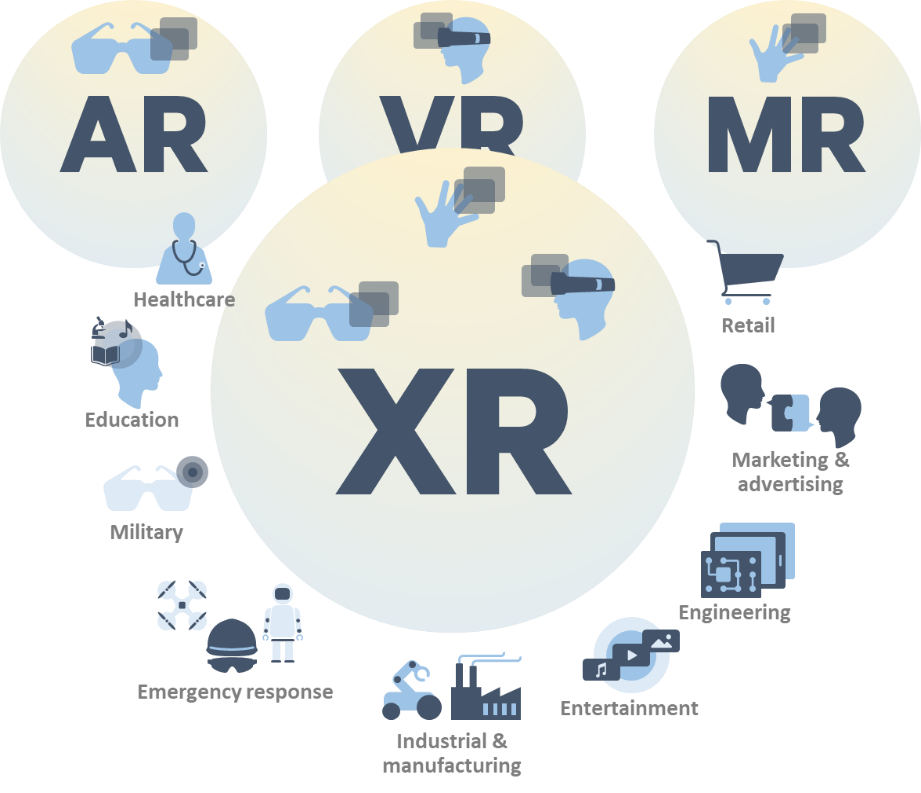 Degrees of Freedom and XR Spaces

A user acts in and interacts with extended realities. Actions and interactions involve movements, gestures, body reactions. The Degrees of Freedom (DoF) describe the number of independent parameters used to define movement of a viewport in the 3D space. The following different types of Degrees-of-Freedom are described: 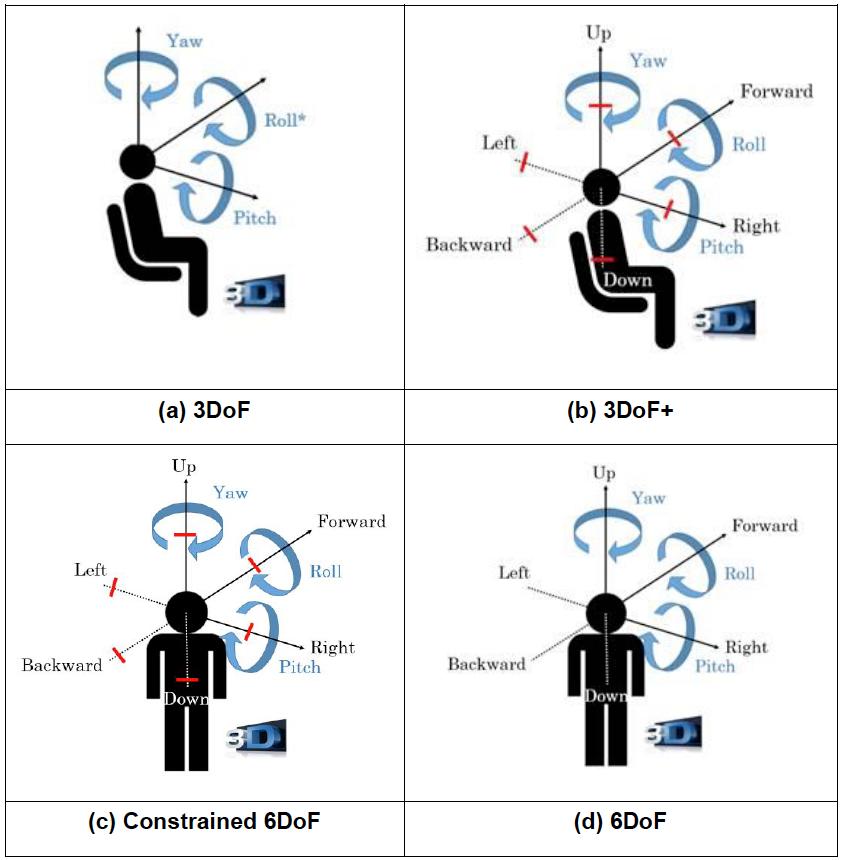 A position in the XR space is a 3D vector representing a position within a space and relative to the origin.

A simplified diagram (mapped to 2D) on XR Spaces and and their relation to the scene is provided below. 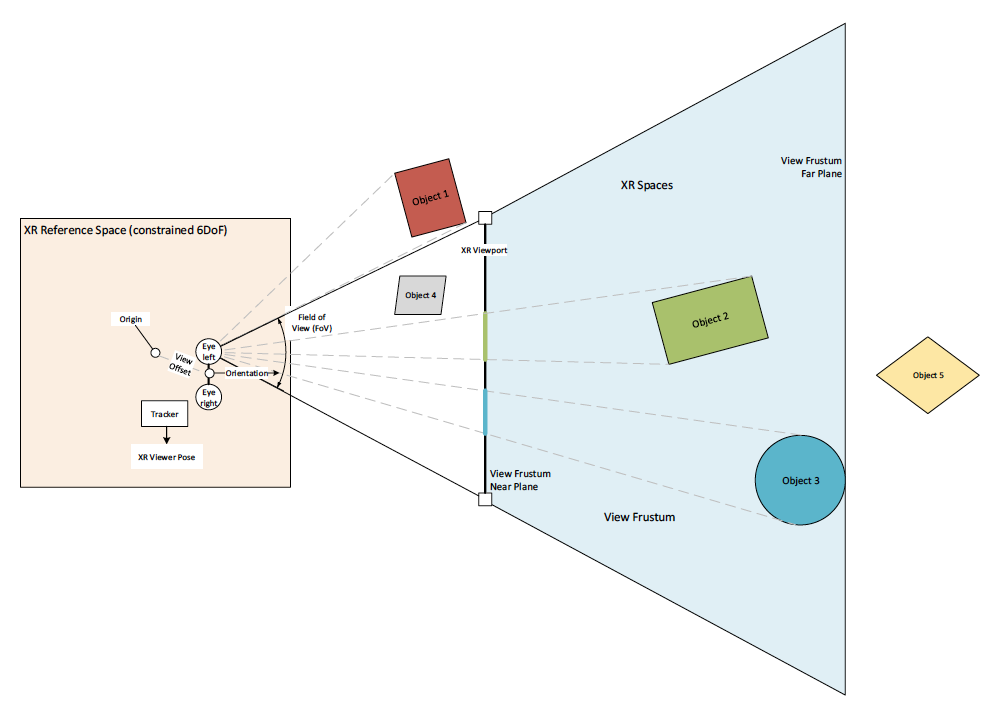 An XR View describes a single view into an XR scene for a given time. Each view corresponds to a display or portion of a display used by an XR device to present the portion of the scene to the user. Rendering of the content is expected to be done to well align with the view's physical output properties, including the field of view, eye offset, and other optical properties. A view, among others, has associated:

An XR Viewport describes a viewport, or a rectangular region, of a graphics surface. The XR viewport corresponds to the projection of the XR View onto a target display. An XR viewport is predominantly defined by the width and height of the rectangular dimensions of the viewport. In 3D computer graphics, the view frustum is the region of space in the modeled world that may appear on the screen, i.e. it is the field of view of a perspective virtual camera system. The planes that cut the frustum perpendicular to the viewing direction are called the near plane and the far plane. Objects closer to the camera than the near plane or beyond the far plane are not drawn. Sometimes, the far plane is placed infinitely far away from the camera so all objects within the frustum are drawn regardless of their distance from the camera.

An XR Pose describes a position and orientation in space relative to an XR Space:

An XR Viewer Pose is an XR Pose describing the state of a viewer of the XR scene as tracked by the XR device. XR Viewer Poses are documented relative to an XR Reference Space.

The views array is a sequence of XR Views describing the viewpoints of the XR scene, relative to the XR Reference Space the XR Viewer Pose was queried with.

In XR applications, an essential element is the use of spatial tracking. Based on the tracking and the derived XR Viewer Pose, content is rendered to simulate a view of virtual content.

XR viewer poses and motions can be sensed by Positional Tracking, i.e. the process of tracing the XR scene coordinates of moving objects in real-time, such as HMDs or motion controller peripherals. Positional Tracking allows to derive the XR Viewer Pose, i.e. the combination of position and orientation of the viewer. Different types of tracking exist:

To maintain a reliable registration of the virtual world with the real world as well as to ensure accurate tracking of the XR Viewer pose, XR applications require highly accurate, low-latency tracking of the device at about 1kHz sampling frequency. An XR Viewer Pose consists of the orientation and the position. In addition, the XR Viewer Pose needs to have assigned a time stamp. The size of a XR Viewer Pose associated to time typically results in packets of size in the range of 30-100 bytes, such that the generated data is around several hundred kbit/s if delivered over the network.

Spatial mapping, i.e. creating a map of the surrounding area, and localization, i.e. establishing the position of users and objects within that space, are some of the key areas of XR and in particular AR. Multiple sensor inputs are combined to get a better localization accuracy, e.g., monocular/stereo/depth cameras, radio beacons, GPS, inertial sensors, etc. Some of the methods involved are listed below:

Spatial mapping and localization can be done on the device. However, network elements can support the operations in different ways:

Indoor and outdoor mapping and localization are expected to have different requirements and limitations. Privacy concerns need to be explored by the service provider when scanning indoor spaces and storing spatial features, especially when it is linked to global positioning.

Tracking adds the concept of continuous localisation over time.